The student conference was organized in collaboration with the Department of Scientific Research and Faculty of Law and Political Science, in which four undergraduate students presented their research on the subject of cybercrime in Afghan law. Dr. Mehdi Mohaqeq, director of scientific research at Kateb University, thanked the four students who researched cybercrime in Afghan law and said that the university’s scientific research management supports all students’ research activities and provides them with the necessary facilities.

Following the program, Dr. Habibi, Secretary of the Research Committee of Faculty of Law and Political Science, spoke about cybercrime in Afghan law and the problems caused by these crimes in the world. He acknowledged that cyber espionage has become one of the most damaging crimes against the government and large organizations, and is a growing crime that the government has so far failed to stop. Abdul Hamid Mehrzad, Ms. Najia Anwari and Ahmad Shah Samim each gave a speech on cyber espionage in Afghan law, each of which spoke on the related subject. At the end of the program, appreciation letters were given to the scientific lecturers from scientific research department of the university and Faculty of Law and Political Science. 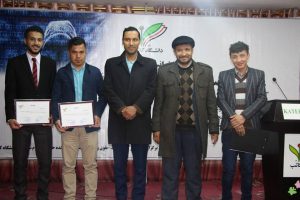