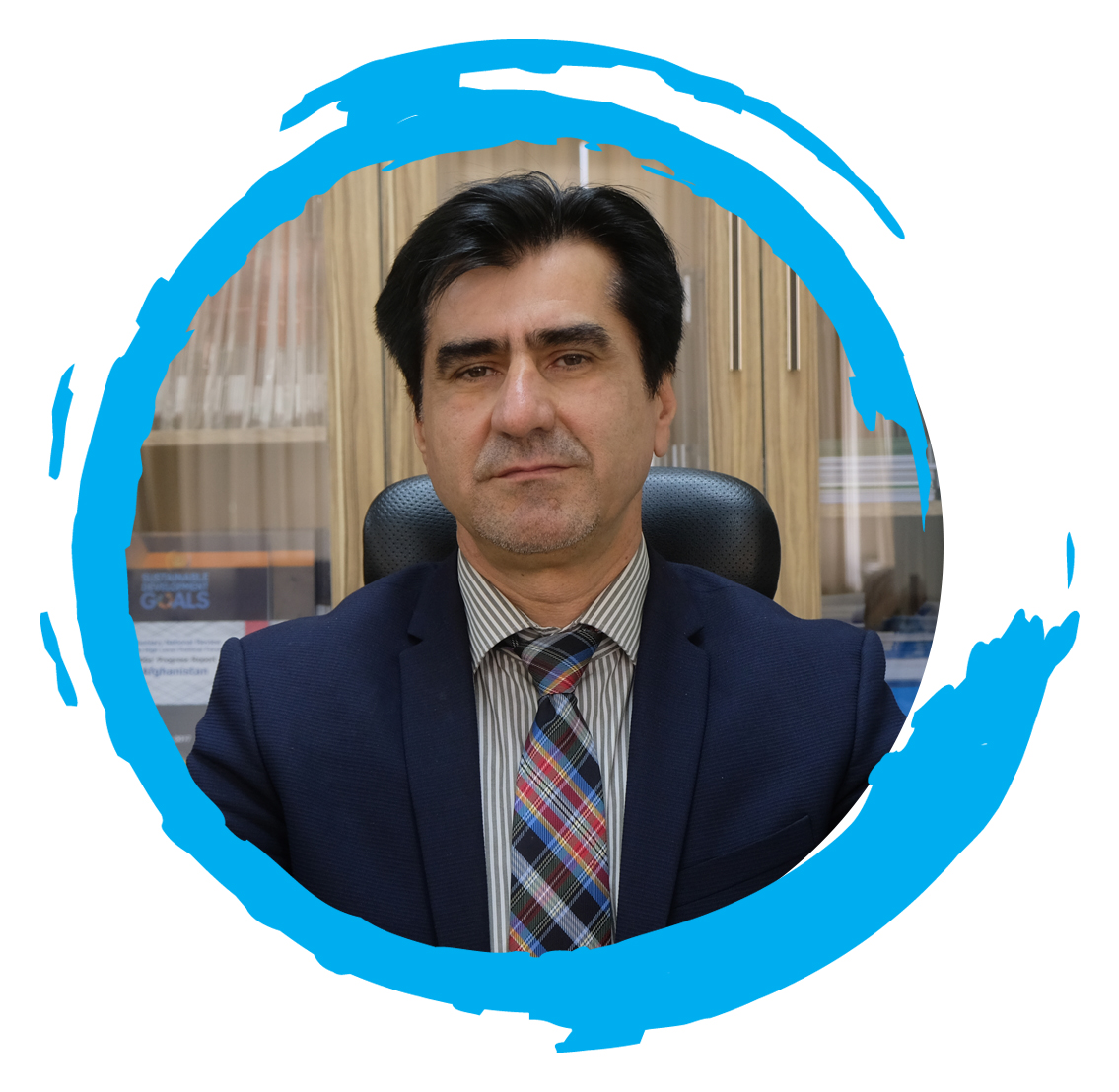 Mr. Nabi Sroosh is the Director General of Policy and Results based Monitoring and National Focal Point for the SDGs in the Ministry of Economy of Afghanistan. He prepared Afghanistan SDGs progress report for the 2nd Voluntary National Review (VNR) and presented to the High Level Political Forum (HLPF) which was held in July 2017, UN HQ, New York. Mr. Sroosh had very active role in developing Afghanistan National Development Strategy (ANDS) and he was the head of Monitoring and Reporting Department of the ANDS and Millennium Development Goals (MDGs) in Afghanistan. He has a Master Degree in Management and his professional career is management and development.

Zia Shefaie has MA in Economics and currently works as Vice Chancellor for Finance and
Administration at Kateb University. Prior to his current position, Mr. Shefaie worked as
Managing Director at Kateb Research Institute where he played significant role in development
studies, linking Kateb University with international organizations and initiating the first-ever
conference related to “Role of Universities in implementing the SDGs in Afghanistan”. He has 13
years diverse working experiences mostly in development finance with financial companies like
Exchangerzone, Afghanistan Institute of Banking and Finance (AIBF), the First Microfinance
Bank (FMFB) and BRAC Afghanistan as COO, senior trainer, product development officer,
program supervisor and MIS Manager. Additionally, he delivered lectures at private universities
over the past five years, early in the morning or evening.   He has gained a lot of experience
working under international microfinance, banking and academic consultants for many years
and has worked with people at all levels and is passionate about helping people learn and
transform the way they work to achieve personal and business goals. From accredited
certification standpoints, Shefaie is a Certified International Microfinance Expert from Frankfort
School of Finance and Management (FSFM) and further has pursued several quality online
courses facilitated by the world famous institutions like MIT, George Town University and
International Monetary Fund (IMF).

Dr. Kahkan Fazelpour is a medical doctor graduated to Kabul Medical University in 2012. He has more than 15 years of Public Health and Project Management experience with different national and international organizations. He has received extensive trainings of TB-DOTS (MoPH/UNDP), Psychology (FMIC), IMCI (MoPH), Medical General (Clinical Training in Majority of Kabul City Teaching Hospitals), M&E, RBM and Gender Training (UNDP/MoEC), ToT on SDGs System Thinking (UNDP/MoEC), SDGs System Impact Workshop (UNDP/MoEC) and SDGs System Thinking Workshhop (UNDP/MoEC). He has also attended several international conferences such as the Geneva Conference on Afghanistan where he was part of the delegation and attended the main conference and side meetings on SDGs, People on the Move and Returnees, Population Dynamic, Food Security, Human Rights, Private Sector and Anti-Curroption). He also participated in the Inception Wokrshop on SDGs Statistics Quality Improvement (UNESCAP) at Bangkok City.

Currently, since 2017 he has been working as the Head of Unit/Health Technical Advisor, SDGs Coordinator Unit at the Office of the Chief Executive, Islamic Republic of Afghanistan. Previously, he has worked as the Technical Manager for TB Intervention Project (UNDP/Global Fund), at the Agency for Assistance and Development of Afghanistan (AADA), Head Office, Kabul. Prior to that, he has worked with some wel-known international organizations such as the Acton for Development (AFD) as Project Coordinator, Jamhouriat Hospital as Internal Medicine Specialist, Bakhtar Development Network as Finance Controller and Peugeot Citrean PSA UK Ltd as Stock Officer and at Save the Children, Kabul, Afghanistan Logistics Officer. He has also worked as Community-Based Health Care Supervisor at the Save the Children, Kabul, Afghanistan for 3 years (1997 – 1999).

I am a Postdoctoral Research Fellow in the Department of Development at SOAS, University of London. My research interests include civil wars, insurgent movements, and sub-national political settlements in violent contexts. I received my doctorate in Politics in 2018 from Oxford University, which involved several rounds of mixed-methods fieldwork in Afghanistan. In addition to academic work, I have worked for the United Nations and on several UK government-sponsored international development projects, primarily in Afghanistan and the Middle East.

Ms. Zarlasht Masoom has an MBA from the American University of Afghanistan and two bachelor degrees; one in Business Administration and second in Sociology. She has over 13 years of experience in strategic management, fiscal affairs and development initiatives in private and public sector of Afghanistan.

Currently she works as the Director of Public Investment Management and Infrastructure, Ministry of Finance, Afghanistan (MoFA).  Prior to that she has also worked as Director of Finance and Accounting, Finance and Accounting Directorate, MoFA. She has also worked at some other reputable organizations such as Da Afghanistan Bank first as Senior Analyst, Fiscal Sector, Monetary Policy Department and later as International Economic Analyst & Coordinator, Monetary Policy Department.

Some of her well-known achievements include the establishment of an external database for the usage of partners and other organizations of DAB, containing the economic indicators; establishment of a survey of Regional Economic Activity (SREA) for DAB and budget making for the year 2019 and execution of 96% budget of the MoF in 2017.